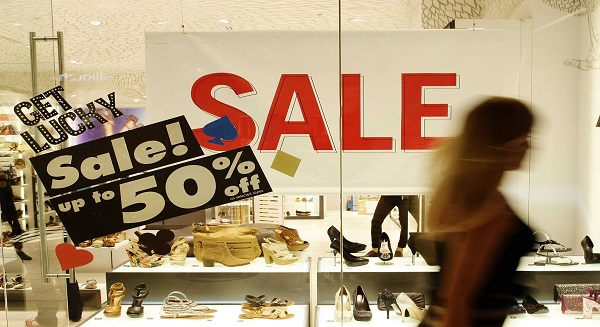 British retail sales rebounded last month after a weak December to record their strongest annual growth since April 2011, helped in part by a recovery in the country’s property market, a monthly industry survey showed on Tuesday.

The British Retail Consortium, a trade body, said the total amount spent in stores last month was 5.4 percent higher than a year earlier, a sharp improvement on the meagre 1.8 percent growth recorded for December.

The figures point to more of the strong consumer demand which propelled British economic growth last year, despite the fact that consumer price inflation is rising faster than wages.

“With a record number of people now in work and the continued recovery in the housing market we have seen very strong performances in furniture and other non-food items,” BRC director general Helen Dickinson said.

Weather also played a role, the BRC said. The lack of snow this year – unlike in January 2013 – encouraged more people to go to the shops, benefiting all sectors other than groceries, which had their weakest three months since 2008.

Sales on a like-for-like basis, a measure which strips out changes in floorspace and is favored by equity analysts, rose by 3.9 percent on the year, up from 0.4 percent in December and outstripping economists’ forecasts of 0.8 percent growth.

However, the strong growth marked a catch-up in sales after a weak December, not a big improvement in the underlying trend, and discounting continued to play a role for many retailers.

Sales in the three months to January were 3.2 percent higher than a year earlier – up sharply from a six-month low of 2.2 percent in December but only slightly above the average 3.0 percent growth rate for the previous 12 months.

Official retail sales data for January is due on February 20. In contrast to the BRC survey, December’s official data showed the strongest growth in sales volumes since October 2004, propelled by higher sales at independent stores, which are less likely to be covered by the BRC.

But both surveys present a broadly similar picture of improving demand once month-to-month volatility is ironed out.

Furniture was the best-performing category with the fastest annual sales growth since April 2006 as people moving home bought new beds and sofas, the BRC said.

The number of mortgage approvals for house purchase – a proxy for property transactions – rose to its highest level since January 2008 in December.

However, food sales performed poorly in the three months to January, with annual growth of just 0.8 percent in total spending, the lowest since records began in the last three months of 2008.

Snowy weather in January 2013 had encouraged people to bulk buy, something not repeated last month, and prices are rising more slowly than in previous years.