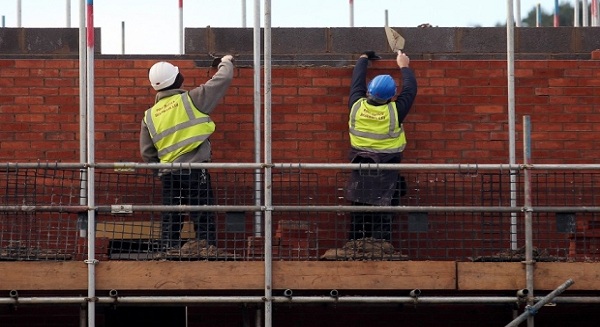 British construction output suffered a steep fall in May, raising the prospect that overall economic growth may fall short of expectations in the second quarter.

The surprise contraction adds to some signs that the pace of Britain’s rapid recovery over the past year may be easing, a trend which analysts said could see the Bank of England waiting until next year to raise interest rates.

Construction output dropped by 1.1 percent in May after rising by a similar amount in April, hurt by slow-downs in private-sector home-building and commercial work.

In the three months to May, output suffered its biggest drop since October 2012, declining by 0.8 percent, while annual growth slowed to a six-month low of 3.5 percent, the Office for National Statistics said.

Construction only accounts for 6 percent of British economic output. But since late last year it has been an important driver of economic growth as government incentives, low interest rates and a sharp rise in house prices have boosted home-building.

Now some economists believe that the weak numbers – twinned with data this week that showed the sharpest one-month drop in factory output in over a year – may mean second-quarter economic growth fails to match the first quarter’s 0.8 percent rate.

“Today’s data will add to concerns that … the economic situation in the UK is starting to wobble after a glowing period in which almost all data have been largely positive,” said Scott Corfe, an economist at consultancy CEBR.

Royal Bank of Scotland cut its forecast for second-quarter growth to 0.8 percent from 0.9 percent after the data. Deutsche Bank said that even 0.8 percent could be tough.

“Policymakers will be encouraged to err on the side of caution about hiking interest rates too early in what looks to be a still-fragile recovery,” said Chris Williamson, chief economist at data company Markit.

The ONS had no specific explanation for the weakness in private-sector construction, which pre-dates the most recent steps by the BoE to limit how much most Britons can borrow when they purchase a home.

The data contrasts with private-sector surveys. A purchasing managers’ index published by Markit showed the fastest construction growth in four months in June.

There have been some signs that Britain’s housing market is slowing, however.

Mortgage approvals in May fell to their lowest level in 11 months, in part due to tighter affordability checks that lenders have been required to apply since April. Surveyors have reported slower conditions.

There have also been signs of shortages of skilled workers and materials in some parts of the country.

Building new homes now accounts for more than a third of new construction work, and is up 19.4 percent on the year.

But private-sector housing – which accounts for more than three quarters of new homes – showed no growth in May. Public-sector housing grew by 5.2 percent, causing housing as a whole to grow by 1.1 percent.

The last time private-sector housing was so weak – excluding a weather-related hit in February – was in November last year.

House-building remains well below pre-crisis levels, and the BoE has said there is little it can do about the underlying driver for higher house prices, a shortage of homes.

New commercial work such as building office blocks dropped by 3.6 percent in May and is 2.9 percent lower than a year ago.