Gulf countries going to diversify economy & supporting privatization17 May 2016Next 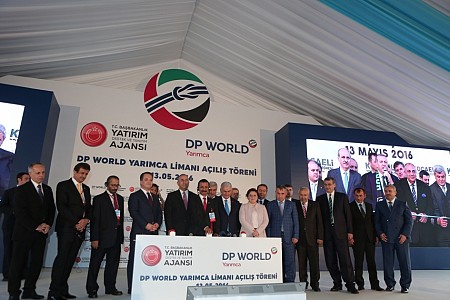 In the presence of the President of the Republic of Turkey, Recep Tayyip Erdoğan DP World Dubai, UAE,Yarimca one of the biggest company in the world has opened officially its new big port in Turkey joined the opening Mınıster of Transport, Maritime and Communications Binali Yıldırım, Turkish Minister of Foreign Affairs Mevlüt Çavuşoğlu and Promotion Agency, Arda Ermut and DP World Group Chairman and CEO, Sultan Ahmed Bin Sulayem.

DP World Yarımca will reduce costs and increase the competitiveness of industrial and trading companies located in our region.

The UAE and Dubai firmly believe in the future of Turkey as a natural bridge between both East-West and North-South axes, creating an efficient and cost-effective outlet to major markets and providing business easy access to 1.5 billion customers in Europe, Eurasia, the Middle East and North Africa.

Turkey and the UAE share a unique heritage. We are bridges to the world at the crossroads of world trade trading nations built on a strong partnership and with a common bond our vision.

Our investment is not just in machinery and equipment it’s about our people our most important asset. DP World Yarimca currently employs 300 people and we aim to reach 650 jobs when at full capacity. There are over 800 jobs identified indirectly in the local economy and many more local and regional supplier opportunities. This illustrates the ripple effect of projects of this magnitude  that boost economy and prosperity for the long term.

The new terminal As one of the biggest in the Turkey

The new terminal As one of the biggest in the Turkey can handle up to 1.3 million containers covering 460,000 square metres, enhancing Turkey’s connectivity with Europe and Asia and enabling trade from the heartland of its most industrialised region.

DP World Yarimca project is the first in Turkey that can scan 120 containers every hour by using remote controlled gantry cranes with automated gate operations featuring a vehicle appointment system for faster processing.

Total trade between Turkey and Dubai