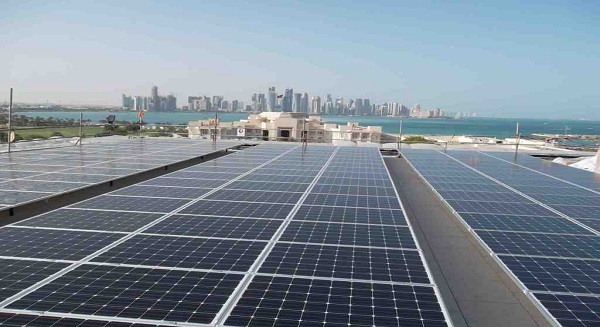 Qatar’s programme to develop and monitor its use of sustainable energy is in the view of Michael Tamvakis, professor of Commodity Economics and Finance, Cass Business School, “a commendable initiative — because the first thing in managing any sustainability issue is to actually start measuring it.”

Tamvakis noted that there are many ways to reduce emissions and achieve sustainable development. These include improving the architecture of buildings and the technology of power plants. Reducing reliance on massive ‘gas guzzling’ cars, popular throughout the Gulf, would also have a positive impact in his view. One possible way to move drivers away from the big CO2 emitting vehicles, he suggested, could be the introduction of higher taxes on these types of cars.

He expected that the development of Doha Metro and the extensive passenger and freight rail transport systems would also lead to a reduction in carbon emissions.

He sees the potential for solar as promising. “Qatar has four megawatts capacity of load for solar electricity and they are planning to increase this to eight megawatts. This is out of a total electricity generation capacity of 6,000 megawatts,” he said.

He added: “Currently the use of solar is less than 1% of the electricity consumption. If they bring it up to 5% or even 10% then that would be great. Anything above 5% is credible.”

One of the disadvantages of solar energy, he said, is that it is a very ‘land-hungry’ technology compared with gas-fired power stations. “Solar takes up a lot of space. You get a lot less electricity from solar per square metre of area used and land is at a premium in Qatar,” he noted.

Another fact is that solar panels typically have about a 25% efficiency rate.

However, the sustainability plans are clearly aimed at maximising the potential for solar through a wide range of applications. “If you tell your various companies ‘you have to install some sort of capacity in your plant — on your building, in your factory’ that’s a different story because you don’t take up additional space,” said Tamvakis.

Commercial buildings with solar panels on the roof and developments designed to optimise insulation and flow of light to cut down energy requirements are, he observed, measures that will have a positive effect on sustainability targets.

This integrated approach to the use of renewable energy within commercial, industrial and residential buildings, as well as initiatives to educate people to be more responsible in their energy consumption, are the way forward, he said.

With many countries around the world aiming to decarbonise by moving away from coal to gas, Tamvakis said Qatar, as the largest LNG exporter in the world, was well placed to meet global demand over the coming decades. It also made economic sense, he commented, to keep the great natural gas resource for export and develop renewable forms of energy to meet domestic consumption requirements.

Simon Currie, Global Head of Energy, Norton Rose Fulbright, gave his perspective on Qatar Solar Energy’s 300 MW PV module production plant. He said: “Solar manufacturing through Qatar Solar Energy is a very positive and forward-thinking move. But in order to get the most out of that you will want a Qatari programme to be quite big; you would want the manufacturing hub to be competitive for projects in the region and internationally. Looking forward, you would want to compete with Iraq, Iran, Jordan and Egypt; in all of these places solar is going to be competitive.”