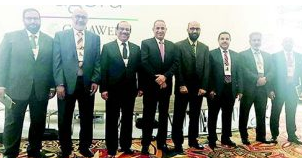 In a statement by Kuwait Petroleum Corporation (KPC) to KUNA, Al-Rashidi said during his participation in a seminar in the annual CERAWeek, held in Houston, the US, that there is a commitment from all oil-producing countries to participate in the production reduction agreement led by OPEC and Russia.

CERAWeek is an annual energy conference which provides a platform for discussion on a range of energy-related topics.

On the oil market developments in 2018, the Kuwaiti minister pointed out that OPEC and the “Vienna Alliance” are seeking common ground for a long-term agreement and continuous cooperation.

He predicted that the full balance of the market will be achieved by the end of this year, adding that the Kuwaiti oil sector is running according to efficiency in a competitive environment, whether in the exploration or refining sector. Al-Rashidi made his remarks during a seminar on the cooperation agreement between OPEC and non-OPEC producers to cut production by 1.8 million barrels per day, which came into effect since January 2017 and will continue through 2018 until the balance of oil markets is achieved.

The seminar was attended by OPEC Secretary General Mohammed Barkindo and Qatari Energy Minister Mohammed Al-Sada, as well as ministers of the Vienna Alliance of Non-OPEC Oil Producers, and the Minister of Minerals, Energy and Industry of Equatorial Guinea.

Meanwhile, Kuwait Foreign Petroleum Exploration Company (KUFPEC) is planning to raise its production by 150,000 barrels per day by 2020, said the company Chief Executive Officer on Wednesday.

A KUPEC statement said that Sheikh Nawaf was speaking during a seminar as part of the annual CERAWeek, held in Houston, the United States of America.

CERAweek is an annual energy conference which provides a platform for discussion on a range of energy-related topics.

The company, through such ventures, is seeking to increase its production, he said.

Meanwhile, Nabil Bouresli, the CEO at Kuwait Petroleum International (KPI), also in a statement at the event, underscored KUFPEC’s success in its partnership with companies in Europe, Oman and Vietnam.

Markets in Asia and the Middle East are promising, amid mounting demand for petroleum derivatives, he has affirmed.