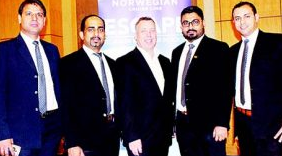 One of the leading cruises based companies in Kuwait, Cruise Center, launched the road show for the initial public offering (IPO) of its 2018 special commission from Norwegian Cruise Line and it’s offers to travel partners. The event in Kuwait showcased all the updates about Norwegian and the Monday night was full-fledged with the participation of more than 100 travel partners. For nearly one hour during the presentation, all the agents were onboard with Nick Wilkinson, Vice-President and Managing Director, Norwegian Cruise Line UK & MEA, has introduced the brand new ship Norwegian Bliss, which will be christened in April 2018. She will sail to Alaska and the Caribbean beginning in May 2018. Norwegian Bliss will feature the largest race track at sea, original new dining concepts, heart-racing water slides that round the side of the ship and so much more. The prominent personalities from the travel companies such as Alghanim, Booking Express, Jumbo, ITL, Ashkanani, Sawah, Jerallah, Cozmo are few of the participants attended the road show along with many other leading travel partners. At the event, Nick Wilkinson underlined the importance and value of the Middle East region to the brand’s overall global objectives, and revealed two exclusive incentives to support growth plans across Saudi Arabia, Bahrain, Dubai, Abu Dhabi, Jordan, and Kuwait.

KLM — Air France Sponsored One ticket for the lucky draw winner and Cruise Center Kuwait (NCL partners) sponsored one cabin for 2 guests as well. It was the second time KLM — Air France participating with NCL for the road show and Rajat Kumar, Country manager of KLM announced the new updates on their fleets and their exciting marketing strategies with NCL for 2018 in launching exclusive Fly Cruise packages for Kuwait Market.

It’s an ongoing process of conducting such road shows by NCL and very soon, they will be planning to conduct more road shows in Kuwait with the participation of guests those sailed with NCL as well, to educate more about the floating resorts.