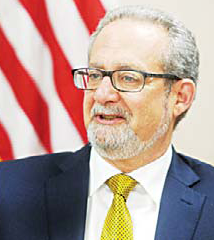 KUWAIT CITY, The American Ambassador to Kuwait Lawrence Silverman reveals that the value of the commercial exchange between Kuwait and the USA exceeds $6 billion, reports Al-Anba daily.

In a press release, he said last year witnessed an unprecedented rate of American products being exported to Kuwait, praising the development of commercial relations between the two friendly countries. Ambassador Silverman highlighted some important deals that were signed between Kuwait and the USA last year including the deal for the purchase of ten Boeing 777 aircraft, which was considered as an important step towards upgrading the fleet of Kuwait Airways.