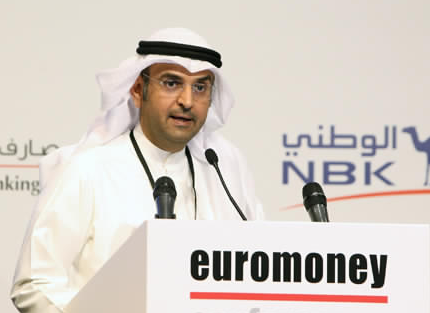 Kuwait Finance Minister Nayef Al-Hajraf yesterday underlined the importance of a planned economic reforms to activate the role of the private sector and “reduce government intervention in the economy.”

Al-Hajraf made his remarks in his opening speech at the 10th session of the Euromoney Conference – Kuwait 2018. Kuwait has great potential in its institutions, human and financial resources, he said. He said that article 20 of Kuwait Constitution affirms that the national economy is based on social justice and fair cooperation between public activity and private activity, to achieve economic development, increase production, and promote living standards.

The minister spoke of certain amendments to legislations, in addition to changes made to the state budget, taking into account the latest economic and financial developments. He revealed that the new legislation has been referred to parliament and will come under close scrutiny by lawmakers during the National Assembly’s forthcoming session. The key objective is to preserve Kuwait’s financial resources, which in turn, gains the trust of the state audit bureau and simplifies the process of putting together the state budget, Al-Hajraf explained. As per the new legislation, he said that all government bodies are required to provide the finance ministry with an annual report detailing such intricacies as the gap between expenses and revenues.

This law draft will replace existing law No 31/1978. “We reformed the 40-year-old law to apply modern developments on public budget principles to make it more accurate. We have sent this draft law to the Cabinet to be listed among the priorities during the next term of the parliament,” added Hajraf. “We are resetting the role of the ministry of finance in the governmental system to transfer from ‘an accountant of public institutions’ to ‘chief financial officer’, to direct the financial policies of the country,” he said.

Similarly, he said that the “government is also required to inform parliament of current financial conditions” on a regular basis, citing the finance ministry’s official website for further details over the new legislation.

The “Euromoney 2018 Conference” brings together several economic and financial experts to discuss how integral the financial sector is to Kuwait’s national development plans.