$1.3 million worth of art auctioned for Syrian refugee children27 October 2013 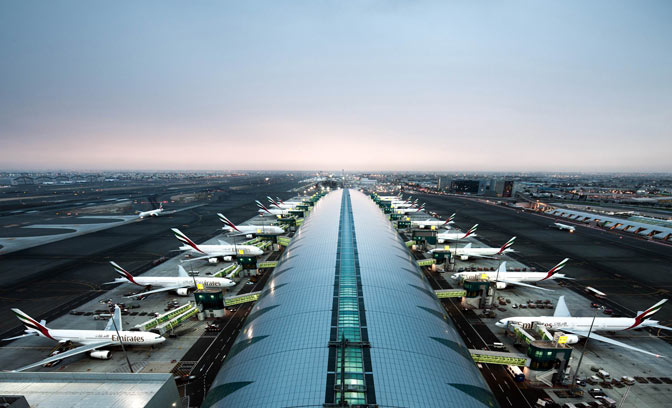 The stage is set for Al Maktoum International Airport at Dubai World Central (DWC), which is going to start its quest to become the world’s busiest airport with the launch of commercial passenger operations today.

Hungary’s Wizz Air will kick off services at the new airport, which will be the largest in the world with five runways and a capacity for 160 million passengers and 12 million tonnes of cargo upon completion by 2020. Initially, the airport will be handling seven million passengers annually.

Strategically located in the vicinity of the Jebel Ali Port and Free Zone, the development is the region’s first integrated, multi-modal transportation platform connecting air, sea and land, and will serve the region as an “international business hub” for decades to come. Once completed, the development will have up to four passenger terminals and five parallel runways, each 4.5 kilometres long.

The airport’s first phase includes a single A380-compatible runway and 64 remote aircraft stands and is ready to offer airlines a complete new catchment area. The authorities are working hard to reinvent the airport experience at DWC with the launch of innovative services to cut short the journey time by reducing checks at the airport through state-of-the-art automated systems. Passengers may be able to get their security status predetermined before leaving for the airport by checking in from their home or office.

“DWC is Dubai’s airport of the future and a fundamental element of our master plan, which is being designed to accommodate the tremendous passenger growth being projected until 2040 and beyond,” Dubai Airports chief executive officer Paul Griffiths said in a recent statement to Khaleej Times.

Dubai Airports, which owns and manages the operations of Dubai International and Al Maktoum International, launched general aviation operations at DWC on April 28, 2011. The new 220sqkm airport has been handling cargo flights since June 2010 and has quickly established itself as an emerging cargo airport in the region with 36 airlines. It handled 219,092 tonnes of air freight during its second full calendar year of operations in 2012, reflecting an increase of 144 per cent over 2011.

Dubai Airports has so far confirmed memoranda of understanding with four airlines, three of which have identified operational start dates. As Wizz Air is all set to launch its operations from the new airport today, Kuwait’s Jazeera Airways and Bahrain’s Gulf Air will start serving the new facility on October 31 and December 8, respectively.

Saudi Arabian low-cost airline nasair currently is the only airline that signed an MoU to serve Al Maktoum International, but is so far unable to identify the suitable time frame to launch its operation from the new facility.