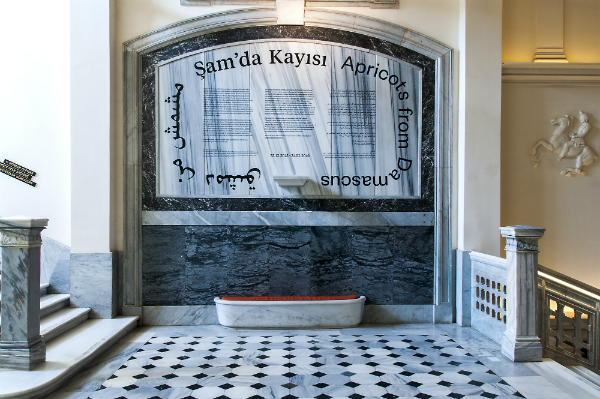 Set to continue until Feb. 21, “Apricots from Damascus” is a collaborative project that also includes contributions by artists Hera Büyüktaşçıyan and Pınar Öğrenci, among others.

Since the escalation of the war in Syria, millions of people have left their homes, with a majority fleeing to Turkey, Lebanon and Jordan. Public spaces in cities like Istanbul, transformed by this climate of movement and exile, encompass different possibilities for encounters and interactions. The zine and exhibition project, Apricots from Damascus, constructed by Dilek Winchester and Atıf Akın, pays homage to Andre Breton’s statement “One publishes to find comrades!” and aims to create a multilingual environment for production and exchange. The participants of the project use the fanzine format to draw on personal experiences, or on the relics of waves of immigration that took place in the recent history of the Republic of Turkey, with a specific focus on Istanbul.

Apricots from Damascus builds upon an earlier zine project Apricot City A4, which was initiated in Istanbul by artist Winchester in 2010, and distributed by the local city PVC pushcart tenders. An unregulated, but tolerated business, these carts are part of Istanbul’s urban, informal economy, and are often operated by migrants from Eastern Anatolia, particularly Malatya, a region famous for its apricots.

In 2015 Winchester teamed up with one of the original contributors Akın to collaborate on a new zine and an exhibition that features works and references by all the commissioned editors. The title of their collaborative project, Apricots from Damascus, is translated from the Turkish “Şam’da Kayısı” that forms part of an idiomatic expression meaning “It doesn’t get any better than this.” The zines, which will also be distributed in public spaces in Istanbul, are printed in Arabic, English and Turkish. Apricots from Damascus positions a form of publication as an artistic practice, in an effort to create a more accessible template for a cultural commons.

The exhibition takes place in the research and social spaces of SALT Galata. It gathers the artists, writers and intellectuals who have been approached to each edit an issue of the zine, along with accompanying artworks or references. The hope is that by integrating the exhibition into the active areas of the building, exiled or settled artists in Istanbul can find spaces to commune together.

A panel discussion with the organizers and editors of Apricots from Damascus will take place at SALT Galata on January 6, 2016.