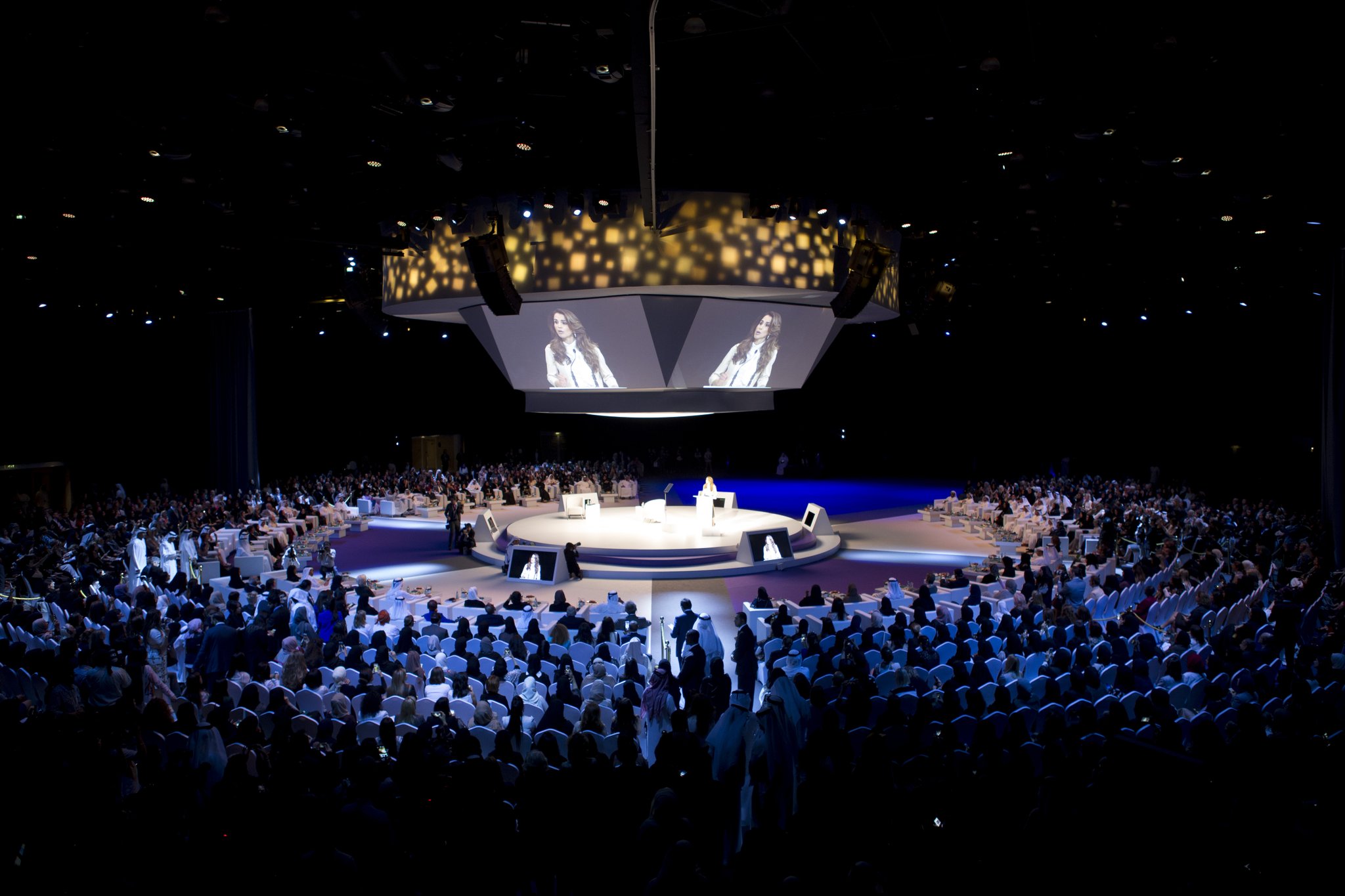 Dubai, 23 February 2016 – Global Women’s Forum Dubai 2016 opened today with a vibrant roundtable discussion featuring women leaders representing Europe, Africa and the United Arab Emirates (UAE), the host country for the meeting, which is taking place 23-24 Februrary at the Madinat Jumeirah in Dubai. Among the day’s highlights was a rousing keynote address by H.H. Queen Rania Al Abdullah of Jordan on the need for better understanding of Arab women; and a far-ranging discussion with Christine Lagarde, who just began serving her second five-year term as Managing Director of the International Monetary Fund and who is making her first official visit to the UAE.

Clara Gaymard: We have come here to talk, to listen, to learn

“We have come here to talk, to listen, to learn – to innovate,” said Clara Gaymard, president of the Paris-based Women’s Forum for the Economy & Society, referring in her opening remarks to the conference theme (Lets Innovate!). “Let us feel confident to network, to enrich our knowledge and experiences, in the certainty that our voices matter.”

Queen Rania: Arab women have always been subject to stereotyping

In a much-anticipated keynote speech, Queen Rania – who previously attended the 2006 Women’s Forum Global Meeting in Deauville, France – spoke (in Arabic) about challenging stereotypes of Arab women, and said she hoped Global Women’s Forum Dubai 2016 – the first Women’s Forum event in the MENA region – would be “a bridge to understanding”. Ongoing misperceptions are ”often a challenge for women in the Arab Region,” she said. “Arab women have always been subject to stereotyping, whether it is a result of Western misinformation and lack of awareness, or Eastern traditions and perceived female oppression. Women do not underestimate the difficulty of changing these stereotypes, but they try to overcome them according to their own pace, on their own terms within the reality of their own culture.”

Christine Lagarde: UAE is a country that celebrates and encourages women as very few others do!

Christine Lagarde, who has taken part in many international Women’s Forum events over the past 12 years, engaged in a lively plenary conversation with Publicis Groupe Senior Vice-President Olivier Fleurot. She set the tone for the two-day conference by greeting “all those of you who are engaged in the empowerment of women. And I know, having spent a bit of time in [the UAE], that this is a country that celebrates and encourages women as very few others do.”

Asked about her hopes for her next five-year IMF term, she said, “My hope is that the IMF would no longer act solely in a remedial role, where we intervene when a country is in absolute crisis, when the balance of payments is in an absolute disaster situation — that instead we could play a preventive role, a collaborative role, cooperating with other international organisations, to help restore prosperity, stability and peace — I think we should also be at that table.”

In the Forum’s first plenary session, H.E. Reem Ebrahim Al Hashemi, recently named UAE Minister of State for International Cooperation, was asked to comment on the UAE’s efforts to support the advancement of women. “Women are partners in building this nation,” she replied. “There is a sense we are all in this together, we are united. Women have always been an integral element of how we can take this story forward.”

Margaret Vestager, European Commissioner for Competition, stressed the need for cooperation across regions and sectors, and for rising to the challenges of finding enduring political solutions. “It has always been a great inspiration for me to work with people in a group, to see how different views come forward, to make things work comprehensively,” she said. “Politics is trying to do what you think is right and trying to do it with people who you admire and who you respect.” Referring specifically to the current economic and social turmoil in Europe, she said, “Our institutions are still strong but we need leadership.” She pointed out that “the strongest leader in Europe is a woman. [German Chancellor] Angela Merkel’s kind of leadership — which is daring, which is on-the-ground, which is of course not without problems— is inspiring for everyone.”

Emma Bonino, former member of the European Parliament, drew frequent applause with candid remarks on her historic battles – and victories – on behalf of gender balance. “I never forgot to have women on my radar and in my priorities,” she said, looking back on her 40-year political career in Italian and European politics. “First of all, I am a woman, and I’m sorry, I cannot forget that. Secondly, I think that not to use 50% of the energy of the planet is a pity. Third, I strongly believe that, just because we have been out of power for hundreds of years, there’s no reason we shouldn’t try. The world is in such bad shape run by men, it seems unlikely to me we could do any worse. Also, it’s not so difficult — if we just try, we will succeed.”

CNN’s Becky Anderson, the session’s moderator, recalled her mother’s words: ‘Being a women is a privilege in and of itself — think of the alternative!’ She then moved the discussion to turning points – crucial moments in a woman’s life or career after which nothing is the same. “My turning point was the moment I chose to leave the academic world to become an entrepreneur,” said H.E. Ameenah Gurib-Fakim, president of the Republic of Mauritius, leading scientist, and expert on biodiversity. “I left behind my comfort zone, a salary, doing things in the way of habit, to start my own business. Coming from Mauritius, a small country, coming from a Muslim background — all this meant I was taking a very big risk…. So my narrative all along has been we need to provide a better infrastructure for those who take risks, we need to get young people in Africa into science, technology and innovation.”

Global Women’s Forum Dubai, co-organized by the Women’s Forum for the Economy & Society and the Dubai Women Establishment, brings together more than 2,000 leaders from around the world – women and men – representing business, government, academia as well as art and culture, with the aim of considering new perspectives for today and tomorrow; creating a powerful, global network capable of boosting the influence of women throughout the world; conceiving innovative and concrete action plans to encourage women’s contribution to society; and promoting diversity in the business world.

Building on the theme Let’s Innovate!, Global Women’s Forum Dubai showcases cross-sector innovation and women’s achievement. The Discovery, the renowned creativity space at Women’s Forum meetings, is among the highlights of Global Women’s Forum Dubai 2016, with workshops and exhibits serving as content relays for the main program sessions. The event also feature key Women’s Forum initiatives such as CEO Champions, Rising Talents, Women in Media, and a celebration of the 10-year anniversary of the Cartier Women’s Initiative Awards. An official delegation of business and government leaders from Scandinavia are guests of honor.