EU publishes key findings of the 2013 progress report on Turkey 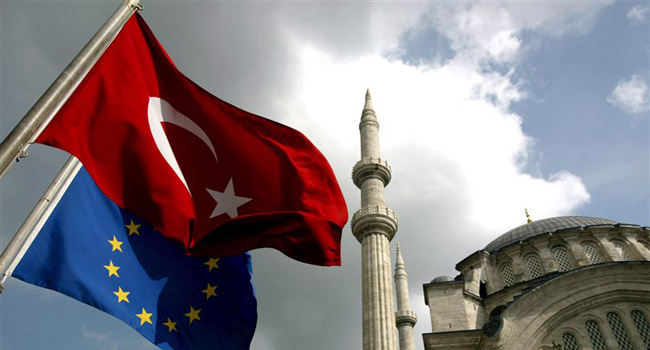 The Commission’s 2013 Progress Report on Turkey highlights a number of important steps taken by Turkey over the past 12 months, notably the adoption of a fourth judicial reform package and the start of a peace process to end terrorism and violence in the Southeast of the country. At the same time, the report emphasises the pressing need to develop a truly participatory democracy, able to reach out to all segments of society, as well as the clear requirement to further amend criminal legislation and reform its interpretation by the courts so as to ensure respect for fundamental freedoms, including freedom of expression and freedom of assembly. These issues underline the importance for the EU to enhance its engagement with Turkey, especially on fundamental rights, so that it remains the benchmark for reforms in the country.

The accession process remains the most suitable framework for promoting EU-related reforms in Turkey. Therefore, accession negotiations need to regain momentum, respecting the EU’s commitments and the established conditionality. In this regard, the opening of chapter 22 (Regional policy), after more than three years of stalemate in the negotiations, will be an important step.

Reform efforts continued, notably with the adoption of an important judiciary reform package, the announcement of a democratisation package and the start of peace talks aiming to end terrorism and violence in the Southeast of the country and to pave the way for a solution of the Kurdish issue.

However, the political climate continued to be marked by polarisation. This translated into an understanding of democracy as relying exclusively on parliamentary majority, rather than a participative process in which all voices are heard, and finally in an uncompromising stance in the face of dissent and a failure to protect fundamental rights and freedoms. This was exemplified in late May and early June, when police used excessive force in response to a major wave of protests.

In addition, key provisions of the Turkish legal framework and their interpretation by the judiciary continue to hamper respect for fundamental freedoms, including freedom of expression. Cross-ownership in the media and intimidating statements by politicians have made self-censorship in the traditional press widespread

These issues underline the importance for the EU to enhance its engagement with Turkey on fundamental rights. It is in the interest of both Turkey and the EU that the opening benchmarks for chapters 23 (Judiciary and Fundamental rights) and 24 (Justice, Freedom and Security) are agreed upon and communicated to Turkey as soon as possible with a view to enabling the opening of negotiations under these two chapters. This would significantly contribute to ensuring that the EU remains the benchmark for reforms in Turkey.

With regard to regional issues and international obligations, Turkey expressed support for a resumption of talks aimed at achieving a comprehensive solution of the Cyprus issue under the good offices of the United Nations. However, Turkey has still not complied with its obligation of full non-discriminatory implementation of the Additional Protocol to the Association Agreement and has yet to remove all obstacles to the free movement of goods.

Turkey is a functioning market economy. In 2012, the Turkish economy slowed down to an annual GDP growth of 2.2% from an unsustainable level of around 9% in the preceding two years. The slowdown was partly induced by a tightening of monetary policy and was accompanied by a rebalancing of growth from domestic demand to foreign trade, a narrowing of the current account deficit and falling inflation. In the first quarter of 2013, the economy regained some momentum, but Turkey’s financial markets and the Turkish lira have subsequently come under severe downward pressure in the context of anticipated changes in international monetary conditions, domestic political unrest and the civil war in neighbouring Syria. These developments underline the economic vulnerability associated with Turkey’s still large current account deficit and they may put at risk the return to growth in the short term.

Turkey’s alignment efforts with the acquis continued. Progress was particularly noticeable on free movement of goods, financial services, energy, regional policy and coordination of structural instruments. Significant developments were noted on establishing legal framework in the area of migration and asylum. Continued efforts are needed towards legislative alignment and increased institutional capacity in most areas. Further significant progress should continue on judiciary and fundamental rights and justice, freedom and security.

The signature of the EU-Turkey readmission agreement and the simultaneous start of the visa dialogue need to move forward.

State of play on accession negotiations

EU accession negotiations with Turkey began on 3 October 2005. In total, 13 out of 33 negotiation chapters have been opened and one chapter has been provisionally closed. As a result of Turkey not having fully implemented the Additional Protocol to the Association Agreement, the EU decided in December 2006 that eight negotiating chapters could not be opened and that no chapter could be provisionally closed until Turkey meets its obligations.

September 1963: Signature of the Association Agreement, aiming at enhancing economic cooperation and achieving a Customs Union between Turkey and the EEC

April 1987: Turkey presents its formal application for membership of the European Economic Community

December 2006: The Council decides that 8 negotiating chapters cannot be opened and no chapter can be closed until Turkey meets its obligation of full, non-discriminatory implementation of the additional protocol to the Association Agreement

June 2010: Chapter on Food safety, veterinary and phytosanitary policy becomes the 13th chapter on which negotiations are opened

May 2012: European Commission and Turkey start the implementation of the Positive agenda for Turkey

June 2013: The Council agrees to open Chapter 22 on Regional Policy and coordination of structural instruments