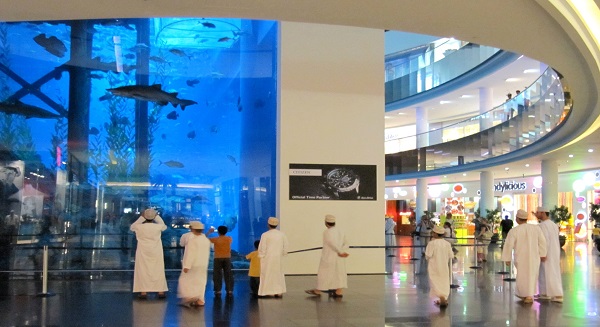 Emaar Properties said its flagship shopping and entertainment destination, The Dubai Mall, has become the world’s most-visited destination for the third consecutive year, welcoming over 75 million visitors in 2013.

Following the impressive footfall of 54 million in 2011 and 65 million in 2012, The Dubai Mall recorded a 15 per cent growth in visitor numbers during 2013, with an average monthly footfall of 6.25 million, said a statement from the top developer.

The mall’s 1,200 plus retail outlets recorded a 26 per cent rise in sales compared to the previous year.

More than 50 per cent of all luxury goods sold in Dubai were purchased at the mall, with its dedicated Fashion Avenue hosting the world’s largest collection of fashion brands under one roof, the statement added.

According to Emaar, the number of visitors significantly surpassed the number of shoppers at the world’s other leading malls such as Mall of America and Bullring Birmingham, UK (40 million each); Intu Trafford Centre, UK (30 million); Part Dieu Lyon, France (29.4 million); and West Edmonton Mall, Canada (28 million).

Over 40 per cent of the visitors to the mall were tourists, reflecting the tourism demographic trends of the city, with a majority of the overseas visitors coming from Saudi Arabia and other GCC countries, China, India, Russia and Europe, said a top official.

“The record visitor arrival to The Dubai Mall in 2013 is a powerful statement that seals Dubai’s reputation globally as a business and leisure hub,” remarked Abdulla Lahej, the group chief executive officer of Emaar Properties.

The socio-economic impact of the mall on the emirate’s economy is tremendous, having generated more than 25,000 jobs and consistently driving the growth of the city’s retail, leisure, and hospitality sectors – the core contributors to Dubai’s GDP.

Last year, the mall cemented its position as one of the world’s most sought-after high fashion destinations by hosting ‘Vogue Fashion Dubai Experience,’ the largest fashion event of its kind in the Middle East, in partnership with Vogue Italia.

The mall is currently spearheading a global fashion talent scout, to identify and nurture emerging and next-generation fashion designers.

Emaar Malls Group CEO Nasser Rafi said the surge in visitor arrivals and the growth in retail sales were indicators not just of the popularity of the mall but also of Dubai as a preferred destination for shopping and luxury lifestyle experiences.

“Having established Dubai as a global fashion capital, we are now further enhancing the fashion and lifestyle choices at the mall with the expansion of the Fashion Avenue by another 1 million sq ft, which will add 150 new brands to the mall,” he remarked.

Celebrating its fifth anniversary of opening in November this year, The Dubai Mall is centrally located in Downtown Dubai, the most prestigious square kilometre on earth and the flagship mega-development of Emaar.

“The Dubai Mall meets all shopping requirements of visitors, from fashion wear to accessories, electronic appliances and home furnishing, to the latest communication gadgets and audio-visual choices, books, jewellery and much more,” he added.