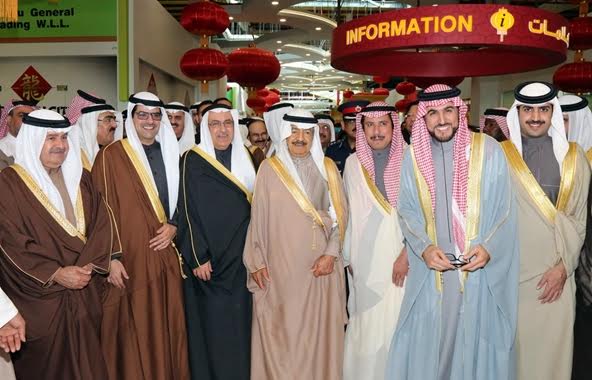 Under the Patronage of His Royal Highness Prime Minister of the Kingdom of Bahrain Prince Khalifa bin Salman Al Khalifa, Diyar Al Muharraq, one of the leading urban developers in the Kingdom, has officially opened Dragon City. The inauguration ceremony of Diyar Al Muharraq’s landmark project, Dragon City, took place on Sunday, the 27th of December, 2015.

Upon arrival to Diyar Al Muharraq, His Royal Highness the Prime Minister was welcomed by the Chairman, board members and senior officials from Diyar Al Muharraq, in addition to members from the top level management of Kuwait Finance House in the presence of honorable ministers, VIPs and government officials as well as a high level Chinese business delegation and members of the diplomatic corp.

Following the inauguration ceremony His Royal Highness the Prime Minister was accompanied on a detailed familiarization tour of Dragon Mall, a commercial shopping centre that is considered to be the gateway to investment and trade exchange between the Kingdom of Bahrain and China.

On this occasion, the Chairman of Diyar Al Muharraq, Mr. Abdulhakeem Alkhayyat, said: “I would like to thank His Royal Highness the Prime Minister Prince Khalifa bin Salman Al Khalifa for gracing us with his presence today as it is the embodiment of the profound support we have received and continue to receive from the government of the Kingdom of Bahrain. It gives me great pride and pleasure to be able to welcome the people of the kingdom of Bahrain to one of our most substantial commercial projects, the brainchild of some of our most innovative individuals whom we are proud to call as our own and part of our team, and the masterstroke of our comprehensive development thus far, Dragon City. We have been waiting on this moment since the conception of the idea for Diyar Al Muharraq and for us to be announcing that the time is now from when we will see our patrons enthusiastically enjoying the many investment opportunities and options that aim to add value to everyday necessities for citizens, resident and visitors.”

“On behalf of Diyar Al Muharraq, I would like to express my immense joy and pleasure at opening our doors to the Kingdom of Bahrain. Dragon City is set to be a substantial impetus that massively stimulates and contributes to the economy of the Kingdom internally as well by creating a considerable number of job opportunities, exponentially increasing the flow of business into the country and further highlighting Bahrain’s ever-increasing lucrative investment options, thus solidifying its status of being the most liberal, inviting and infrastructural resources laden business partner in the region,” he added.

“I thank everyone who has been involved in the manifestation of this dream of ours and would like to emphasize on their proven commitment and passion for our project. I would like to take this opportunity to name Kuwait Finance House in special mention and express my gratitude for their indispensable presence right from the beginning as, being key shareholders in our visionary project, they have been actively stimulating Diyar Al Muharraq through funding of its activities and supporting our management in achieving developing strategy. We are standing on the threshold of a new era of economic prosperity, bilateral relations and commercial sanctuary built with Diyar Al Muharraq at its foundation and Dragon City is guaranteed to play an integral role in that lucrative future,” he concluded.

The $100 million project is poised to rake in enormous beneficial opportunities, including immense financial gains, impact massively on the lifestyle of Bahrainis, bringing about a significant change in their business ventures henceforth and their perspective on general living as well, and consolidate the Kingdom’s status as the hub for trade, commerce and investment opportunities in the region.

Diyar Al Muharraq is a unique master planned city for the people of Bahrain offering range of housing options and quality lifestyle. Diyar Al Muharraq offers a cohesive mix of residential and commercial properties with a strong lineup of projects aimed at creating a long term and sophisticated township.