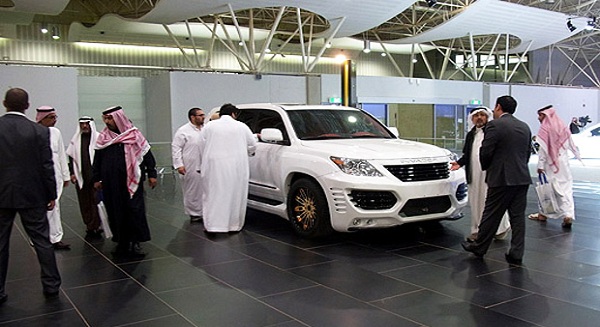 Consumer satisfaction rate for auto dealers in Saudi Arabia reached 76 percent in the second quarter of 2013, according to a survey conducted by DNA Company, a Saudi firm established 11 years ago.

The company has implemented more than a million surveys and employs nearly 224 associates. It has more than 700 clients in Saudi Arabia, including The Ministry of Labor, Saudi Arabian General Investment Authority (SAGIA), the Islamic Development Bank, Aramco, Saudi Telecom, Alelm Company and the National Commercial Bank (NCB).

DNA Company has used the same questions adopted by the Ministry of Commerce and Industry in its first survey which was carried out through the Internet, including personal interviews in order to obtain precise data from 14,279 persons participated in the survey.

Mustafa Nagawi, director of DNA, said that his company utilized different mechanisms in order to ensure quality through personal interviews on the Internet using a 100 percent statistical system covering Riyadh, Jeddah, Makkah, Eastern Province, Tabuk, Qassim and Asir. The age of participants ranged between 31 and 41 years.

“About 63 percent of participants were Saudis, 36 percent Arabs and 1 percent Asian nationals, hence the answers obtained were from the showrooms and workshops involving buyers of 2010 to 2014 car models representing 38 trademarks operated by 24 auto dealers in the Kingdom,” said Nagawi.

The survey was carried out by a team of specialized researchers who spent nearly 3,500 work hours, using the international standard adopted by the European Foundation for marketing research ESOMAR.

Faisal Abushousha, chairman of the Auto Dealers Committee at the Council of Saudi Chambers, said put the consumer satisfaction rate for the second quarter of 2013 at 80 percent, covering 24 auto dealers. The names of auto dealers have not been published in line with government instructions to respect them as such surveys are meant for improvement of services by all auto dealers.

Abushousha said the result of the survey conducted by DNA Company is similar to that of Nelson International Survey Company, which showed 78 percent consumer satisfaction. “Both surveys are positive and encouraging for both the auto dealers and consumers,” he said. He added: “We are looking forward to improving consumer satisfaction continuously as we believe that increasing satisfaction would help us sell more cars are sold and make prompt payment of employee salaries.”

He said auto dealers were receiving a few complaints compared to the large number of cars in the Kingdom. “There are eight million cars on Saudi roads but we are receiving only 24 complaints in a day, that means three complaints for every one million cars, as per the ministry’s circular,” Abushousha said.

The national committee at CSC represents auto dealers before government organizations and the media. The auto dealers employ more than 100,000 Saudis, he said, adding that the sector makes remarkable contribution to the national economy and supports thousands of small and medium enterprises across the country, including sub-dealers, spare parts shops, auto maintenance and car repairs and services.