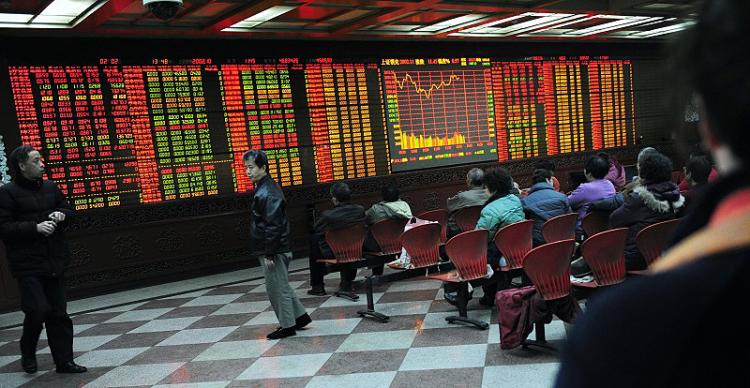 China’s stocks rose for the first time in four days, led by consumer discretionary and industrial companies, after the nation’s economic growth accelerated in the third quarter.

The Shanghai Composite Index (SHCOMP) added 0.2 percent to 2,193.78 at the close. The nation’s economy expanded 7.8 percent in the third quarter, government data showed today, matching the median forecast of 48 economists compiled by Bloomberg. That compared with growth of 7.5 percent in the previous quarter.

“The data suggest the economy is stabilizing and it’s a big probability that the government’s annual growth target of 7.5 percent will be met this year,” said Wang Zheng, the Shanghai-based chief investment officer at Jingxi Investment Management Co., which oversees $120 million. “It’s positive for stocks.”

The Shanghai index has risen 13 percent from its four-year low on June 27, boosted by speculation the city’s new free-trade zone will attract foreign companies and allow for financial liberalization. The index trades at 8.7 times projected earnings for the next 12 months, compared with the seven-year average of 15.4, according to data compiled by Bloomberg.

China’s economic growth accelerated for the first time in three quarters, as Premier Li spurred factory output and investment to meet the government’s expansion goal for 2013.

“Everything is picking up,” Stephen Green, head of Greater China research at Standard Chartered Plc, said in an interview in Shanghai today. “The economy isn’t going to accelerate a lot in the fourth quarter, but continue to grow.”

Industrial production rose 10.2 percent in September from a year earlier, the National Bureau of Statistics said. That compared with the 10.2 percent median forecast of 48 economists and a 10.4 percent gain in August.

A measure of consumer-discretionary stocks in the CSI 300 gained 1.3 percent, the second most among the 10 industry groups. Youngor surged by the 10 percent daily limit to 9.22 yuan after saying it paid 340 million yuan ($55.8 million) for a 4.04 percent stake in UnionPay Merchants Service Co.
BYD jumped 7.7 percent to 40.75 yuan. Shanghai will make a “big push” into alternative energy cars, Wu Qizhou, the deputy head of Shanghai’s municipal environmental protection bureau, said at a briefing today.

Chinese stocks may see some profit-taking before next month’s Communist Party meeting, the results of an audit on local governments’ debt and weaker economic data for October, analysts led by Helen Zhu at Goldman Sachs Group Inc., wrote in a report dated today.

Equities may be “subdued” or post “slightly negative” returns near term unless there are positive surprises from reforms or global demand, the analysts wrote.