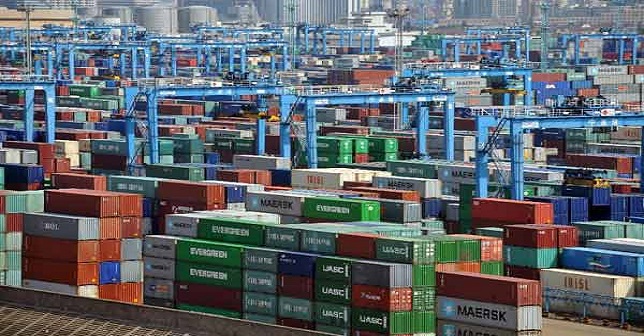 China’s export and import growth likely cooled in January, underlining a broader slowdown in the world’s second-largest economy, though the Lunar New Year holiday effect may overstate the soft momentum.

Weakness in China’s imports could be bad news for the rest of the world, particularly for major commodity exporters such as Australia. HSBC estimates China will overtake the United States to become the world’s biggest importer this year.

Bank loans in China are expected to see a typical seasonal surge in January as banks get fresh lending quotas at this time every year, underlining relatively stable credit demand from the real economy.

Many economists expect a soft slowdown in China’s economy in 2014 as policymakers try to embrace slower but better-quality growth to cut reliance on investment and pursue sustainable development.

Fears of a sharper-than-expected loss of momentum in China were believed to be one contributing factor in a fierce global financial market selloff in January, with emerging markets hit particularly hard.

The median forecast of 19 economists polled by Reuters showed export growth likely slipped to 2.0 percent year-on-year from 4.3 percent in December, while import growth eased to 3.0 percent from 8.3 percent.

Analysts said the reported export data was distorted by the Lunar New Year holiday, during which time most factories shut for extended breaks, and last year’s high base, which was inflated by speculative trade activities disguised as exports.

“Caution must be taken when interpreting the numbers as seasonal volatility in the run-up to Chinese New Year is likely to have distorted the headline figures,” analysts at Capital Economics said in a note to client.

Even if China’s economic growth sinks to a 24-year low of 7.4 percent this year, it will still grow nearly three times as fast as the U.S. economy, and will therefore add twice as much demand to the world economy compared to the United States, HSBC economist Frederic Neumann said in a note earlier this month.

“A wobble on the mainland would shake things up elsewhere,” he said.

January new yuan loans are forecast to have surged to 1.1 trillion yuan ($181.42 billion), more than double December’s figure and on par with 1.07 trillion yuan in the same time in 2012.

The broad M2 money supply is likely to have grown 13.2 percent in January, easing slightly from 13.6 percent in December, according to the poll.

State media have reported that China’s top four state banks speeded up new lending in January, handing over 430 billion yuan in the first 26 days of the month, up 10 percent over the same period a year earlier.

New loans in the first quarter on an average account for a third of the full-year total over the past decade.

The central bank warned in the middle of last month that loans have grown rapidly in January and commercial banks should set a reasonable pace on lending.

“The robust pace of bank lending suggests that demand from the real economy remains resilient, underscoring our view that January’s seemingly weak data should be taken with a pinch of salt,” UBS analysts said in a note.

Meanwhile, annual consumer inflation is expected to edge down to 2.3 percent in January versus December’s 2.5 percent on declining pork prices and warmer weather.

Producer prices are forecast to have fallen for a 23rd month, with the producer price index to drop to 1.7 percent in January from a year ago.

Retail sales, industrial output and investment data will not be published for January. The statistics bureau will release combined data for January and February next month to help smooth out distortions from the Lunar New year holidays.