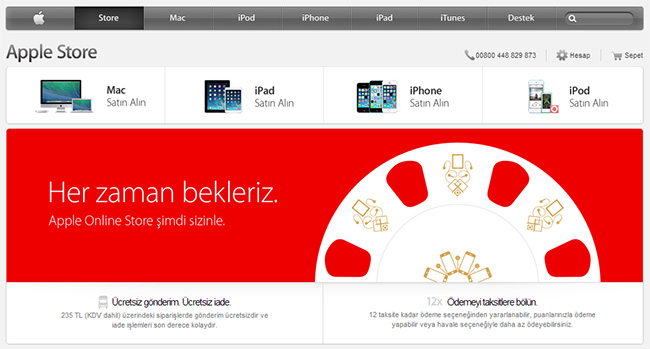 Apple opened its online store to customers in Turkey today, bringing direct ordering of its full lineup of products to the the country’s 74 million residents.

Today, Apple has taken the wraps off of a version of its Apple Online Store for Turkey. Apple is promoting the new store with a large banner at the top of the site. The store is now being promoted on Apple’s homepage in Turkey, and it is also accessible at its direct link here.

Turkey is a crucial emerging market for Apple as the iPhone maker seeks to expand sales of its iPhones and iPads to more countries across the globe.

The Turkey Apple Online Store, like the stores for other countries, offers free shipping for orders over a certain threshold. Notably, the store is selling Apple’s latest iPhones, the iPhone 5s and iPhone 5c, but it is not selling Apple’s latest iPads as of yet. Apple is quoting 5-7 day shipping times for the iPhones, while Mac shipping times range between 1-2 days, 1-3 days, and 4-5 days. The iPad 2 ships in Turkey in 1-3 days, while the first-generation iPad mini ships in 5-7 days.

Earlier this year, Apple opened up its first official sales presence in Russia with an Online Store, and the company plans to move into physical retail in South America with a Brazil store early next year.

Turkey is not part of the first round of countries selling the iPad Air.